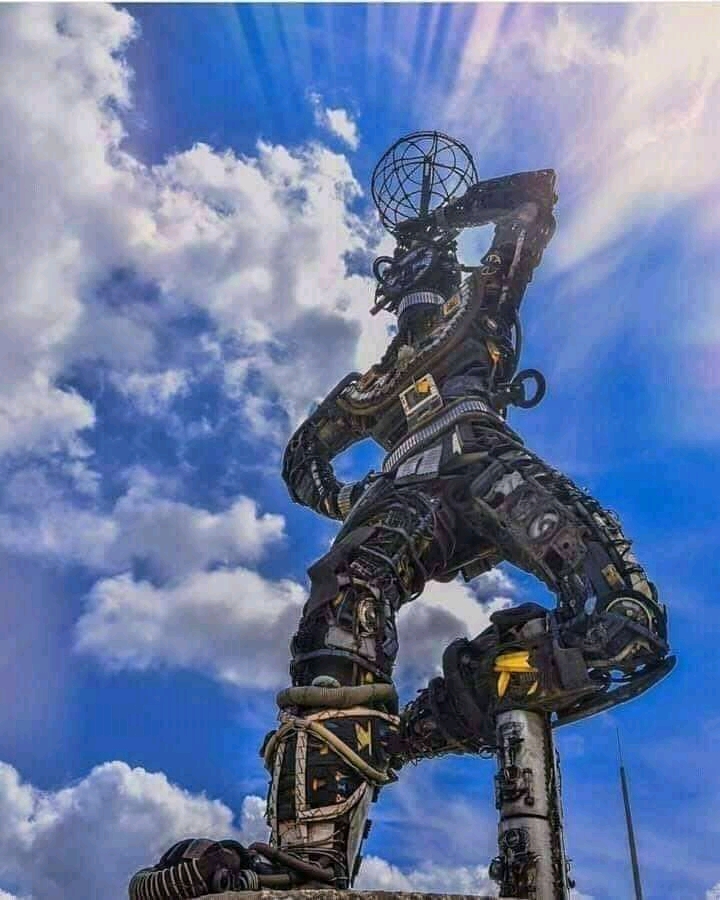 Sculptures are the most enduring and expressive art forms.

A sculpture elicits a more real-world form of engagement than a two-dimensional object in a frame; a painting on canvas or drawing. Historically, sculptures which are three- dimensional have given us insight into a myriad of cultures and civilizations around the world and serve as emblems.
The Michelangelo marble masterpiece sculpted in the 16th century, the 2494 BC Great Sphinx of Giza , the 50 steel charcoal poles that form Nelson Mandela’s face in Howick, SA are some of the  most fascinating and remarkable sculptures across the world.

At the heart of the economic capital of Cameroon is planted a monumental and emblematic sculpture called La Nouvelle Liberté.
It was designed in 1996 by 69-year-old Cameroonian sculptor and painter Joseph Francis Sumegne, who hails from Bamenjou, West Region of Cameroon.
Invited for an exhibition by Doual’art in Douala from 1993 to 1996, Sumégné designed the famous La Nouvelle Liberté.

It is the most famous , emblematic and symbolic artwork in Douala. It is made of scrap metals and stands 12 meters tall.
It features a 5 meters wingspan, and a mass of 8 tons according to Doual’art.

The sculpture is significant as it pays tribute to the contemporary culture of the city and symbolizes freedom.
It has been monikered “Nju Nju” of Deido, a negative connotation by the indigenes who protested against the implantation of sculpture.
Another polemic was about the aesthetical features of the sculpture, made of recycled metallic pieces.
Many thought Sumegne was insane as he went about trash dumps in search of the right ‘waste’ to put together this masterpiece.
Waste car parts, electronic waste, house hold waste, rubber, plastic, metal, pipes, pumps were sinewed by  the sculptor to produce the gigantic structure .

Also, a violent controversy was raised by media on the origins of the artist (who originates from the West Region of Cameroun) which culminated into an ethnic struggle between the aboriginals and non-native population of Douala.
These diatribes led to subsequent attacks and vandalism of the work.

Due to the long-standing protests, La Nouvelle Liberté was officially inaugurated by the Government Delegate of the Douala municipality Fritz Ntone Ntone eleven years later during SUD2007.
The pedestal on which the sculpture stands was sponsored by the Douala city council.
Sumegne is renown in Europe and Asia where he’s had the opportunity to exhibite some his works all made out of recycled waste.