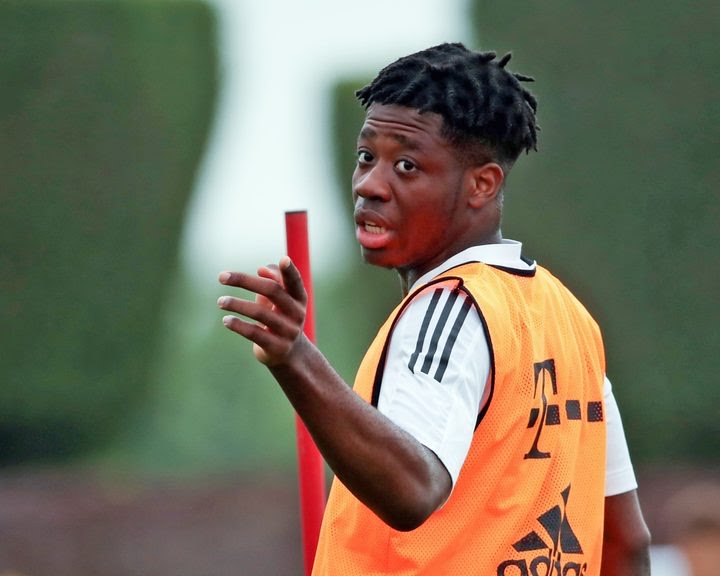 Born 26 March, 2003, Arrey-Mbi is one of six Bayern players in the squad taken to Doha by Flick to have been born this side of the new millennium. Like Y2K, Flick is bringing about a brave new world at Bayern, with youngsters such as 18-year-old Joshua Zirkzee and 19-year-old Alphonso Davies thriving under his stewardship. And now, six months on from signing for the 28-time Bundesliga champions, Arrey-Mbi is being given the opportunity to further his development alongside the likes of multiple Meisterschale winners Thomas Müller, Jerome Boateng and Manuel Neuer.

Arrey-Mbi has earned his opportunity on the back of impressive performances for Bayern’s U19s this season, helping the eldest of the junior teams to second in the Bundesliga U19 table after 14 games, just one point off Stuttgart at the top. With Arrey-Mbi in the side, Bayern U19s have kept four clean sheets in his 10 league appearances, with the centre-back also contributing two goals to the cause along the way. Arrey-Mbi has helped bag Bayern a further four clean sheets from their six unbeaten UEFA Youth League group games that helped secure qualification to the knockout stages of this year’s tournament.

When you think of Arrey-Mbi, think Boateng with a left-foot. At just 16, the teenager is already similar in both stature and physique to his 31-year-old, seven-time Bundesliga winning teammate. That is some statement when you consider the 15-year age gap between the two but is also testament to the incredible physical maturity of this teenager.

Bright Arrey-Mbi has been playing for Bayern Munich’s reserve team this season despite being only 16.

The similarities don’t stop there, though, with Arrey-Mbi developing into a fine footballer too. If he can pick up the quarter-back tendencies of Boateng in training, he will only get better and better with the ball at his feet.

While Arrey-Mbi has been capped at both U16 and U17 level for Germany, he first tasted international football at youth level with England. Despite being born in Kaarst, a town just outside of Düsseldorf, Arrey-Mbi found his break in professional football at English Premier League side Norwich. He spent a season in the Canaries’ academy before moving to Chelsea in 2014, where Arrey-Mbi spent five years with the Blues before Bayern came calling.

First team players such as David Alaba have been helping Bright Arrey-Mbi settle into the first team surroundings.

“He’s fitted in well in training. His athleticism and his understanding of the game are already very far ahead. We had two tactical training units and he didn’t play a single high ball as a central defender. I noticed that and I see a lot of potential in him.” – Bayern teammate David Alaba.

“Bright is already a beast. You can tell that he uses every muscle on his body. It surprised me in training that he’s not shy at all. He really goes into challenges and has a certain calmness on the ball.” – Fellow Bayern man Joshua Kimmich.

“With Jamal and Bright, we’ve secured two hopeful talents for our youth teams. We’re convinced of their qualities and their potential for development and hope they settle in quickly to life at the Campus.” – Jochen Sauer, head of FC Bayern Campus after signing Mbi and Jamal Musiala from Chelsea.