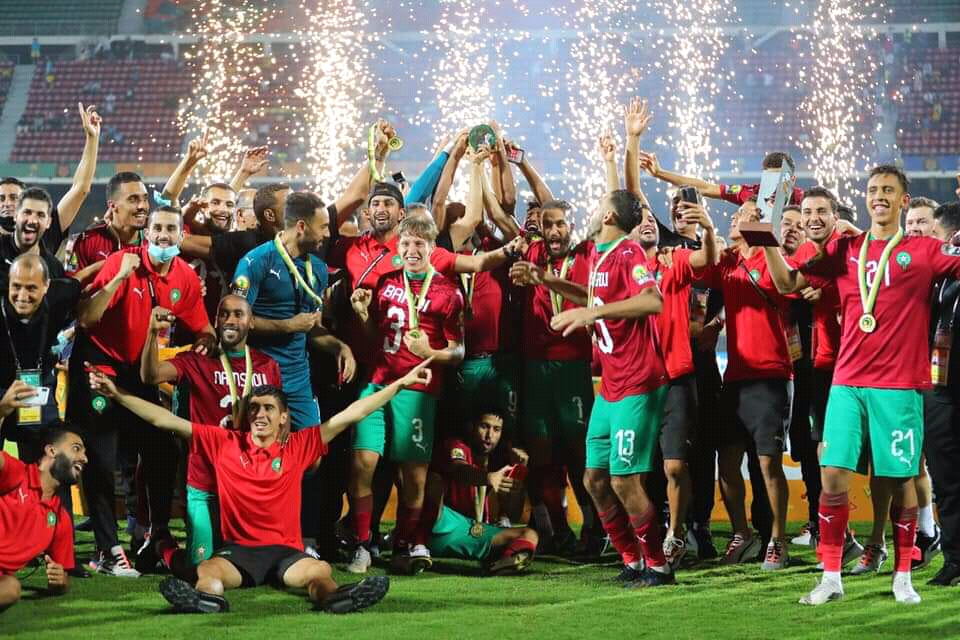 The closing ceremony of the African Nations Championship at the Ahmadou Ahidjo Stadium was characterized with pomp and effervescence. A wide range of professionally-coordinated pyrotechnics made the game day exciting. Sultry singer  Nabila delivered a  groundbreaking performance of her song “Ça Va Allez” and Cameroon’s showman extraordinaire Maalhox stirred up the 6700 fans with two sizzling songs from his repertoire ; “Ca sort comme ca sort” and “Merci” accompanied by exhilarative choreography. Yesterday was quite significant .
Morocco became the first team to successfully defend the African Nations Championship (CHAN) trophy with a 2-0 win over Mali. The Moroccans were faced with a resilient and solid Malian team , a hard nut to crack . They were made to work hard for their win and both of their goals came from second-half corners.

Soufiane Bouftini headed home the first and that was followed up by another from Ayoub El Kaabi, who scored nine goals in 2018 to help Morocco win the trophy . Quite exasperating for Mali, they finished the game with 10 men after the expulsion of their indefatigable Issaka Samake for a second yellow card, as the game went into injury time.

Although the average time for a VAR review is usually 80 seconds, the referee took longer than expected for On-field review to come to that decision.

CHAN 2020 hosted by Cameroon has come and gone . The tournament aroused hopes for Cameroon , that were squashed at the Semi-Finals, with a manifold lessons to learn. Soufiane Rahimi finished as the tournament’s top scorer with five goals, including a brace in the semi-final win over hosts Cameroon in Limbe. Recently reinstated Confederation of African Football (CAF) president Ahmad was part of the presentation ceremony at the end of the match alongside the Prime Minister of Cameroon Joseph Dion Ngute , former Cameroon players Samuel Eto’o, Patrick Mboma and Jacques Songo’o.