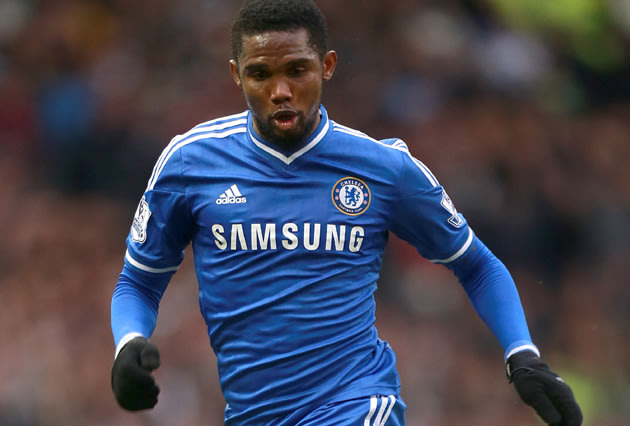 Just a week after Chelsea manager Jose Mourinho  secretly declared ; “The problem with Chelsea is I lack a scorer. I have Eto’o but he is 32 years old, maybe 35, who knows?’ ,  he has come out to clarify that he was only joking . But the drama continues to unfold as somebody has sprouted to say that Mourinho was right to confirm that the Cameroon striker is not 35… because he is in fact 39.

The claim comes from 43-year-old  Italian woman called Anna Barranca who had a daughter with Eto’o 11 years ago when he was playing for Mallorca.

She told the Sun: “It is very evident Samuel was older than the age he said he was when he first came to Europe. I think Samuel is not 35 he is more 39. Samuel was born in 1974 and so that makes him 39 now.”

Barranca is not so reliable when it comes to issues about Eto’o. She has sold numerous stories to the press accusing Eto’o of not paying alimony. Eto’o has reacted by laughing off the rumours that have gone rife.

“I am Samuel Eto’o, what can I say?” he told Sky Sports News after Chelsea’s 1-1 draw with Galatasaray on Wednesday night.

“If at 36 and 37 I can score three goals at Manchester United it means that I still have some juice and I can even score until I am 50.

“But I really don’t care, what is really important to me is to give my maximum to the team, to help them to win some titles.”