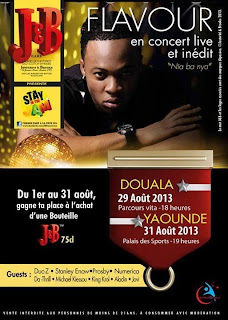 Naija superstar Flavour shall be thrilling fans with his romantic dance moves and hit songs in Douala on the 29th August as from 6 pm CAT at Pacours vita and in Yaounde on the 31st August from 7 pm at Palais des Sports. Duc-Z, Stanley Enow, Prosby, Numerica Da-Thrill, Michael Kiessou, King Kroll, Alodin and Jovi will equally electrify the stage as opening acts.

In 2008, Flavour released his self titled debut album,N’abania which went viral in his hometown. In 2010, Flavour released his sophomore album which included Nwa baby (Ashawo remix) , Adamma, and Oyi (I di catchy cold) .  The album’s success made Flavour one of Africa’s most sort out artists. Flavour was booked to perform at numerous concerts and social events following Uplifted’s release.