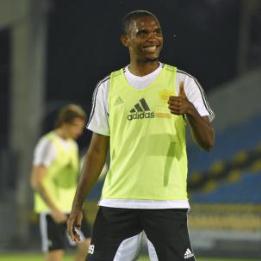 Samuel Eto’o who got  signed to Anzhi Makhachkala this summer from Inter Milan has declared that all speculations that  he moved to the club for money are unfounded. He told CNN;

“I don’t care what people think,” he said. “I think all of us want to work and get paid what we are worth. Anzhi made an offer, which was at the same level as my talent, and they are paying me what they think I am worth.”

He explained that his major motivation came from Anzhi’s billionaire oil tycoon owner Suleiman Kerimov who persuaded him that he can possibly revive football in Russia .

Anzhi is presently occupying the 8th spot with Samuel Eto’o having 4 goals to his credit.